During the 11th and the 12th centuries, Vall de Boí experienced a rich building and artistic activity. Guilds of stonecutters, master painters and handcrafters’ workshops erected, decorated and furnished an extraordinary ensemble of Romanesque churches: Sant Climent of Taüll, Santa Maria of Taüll, Sant Joan of Boi, Santa Eulàlia of Erill la Vall, Sant Feliu of Barruera, La Nativitat and Sant Quirc of Durro, Santa Maria of Cardet and L’Assumpció of Coll. Eight Romanesque churches and one hermit, all of them considered World Heritage by UNESCO.

Built under the influence of Lombard Romanesque, the churches of Vall de Boi are functional buildings of one or three naves, which stand on small granite ashlars and are covered by wooden beams or tunnel vaults. Its bell towers stand out: slender square plan towers which used to serve the function of connecting and surveying the territory. Saw-tooth shaped friezes, Lombardy friezes and blind arches create patterns that decorate the exterior of the apses and bell towers.

In the interior of the churches, groups of mural paintings, Descents, carvings and altarpiece frontals used to fill the spaces with images which had the purpose of revealing the spiritual values of the medieval society.

Today, many of these works of art are kept in Barcelona, at the Museu Nacional d’Art of Catalonia. Still, it is at Vall de Boí, at the places for which they were created, where the replicas of these images convey their full meaning and reveal their original purpose. The ensemble is presently run by the Romanesque Centre of Vall de Boí.

The best means to get to know this rich heritage is to profit from the opening of the churches to the public as well as from the guided tours and the information brochures offered by the center. 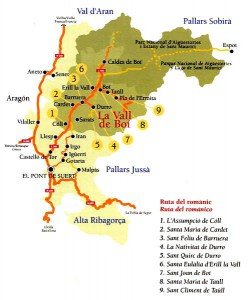